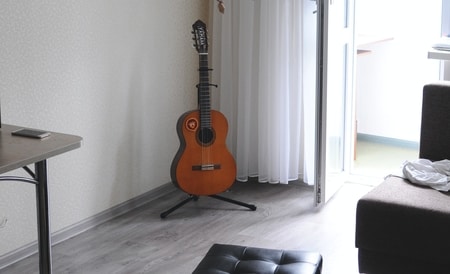 I’ve been learning classical guitar, as well as many other styles since they all have aspects I like. But, a question that beginners can often have is how hard is it to learn compared to other styles, and whether it’s worth it. I thought I’d take some time to explain whether classical guitar is hard to learn.

Generally, classical guitar is not hard to learn or play. There are fundamental techniques such as how you hold the guitar, and how to position the fingers which does take a little bit of time to get comfortable with. Learning the music theory for classical guitar is logical and easy to understand.

In this article I will give an overview of the differences between classical guitar and other styles, as well as other instruments so you can get a good idea about whether learning classical guitar is right for you.

How Classical Guitar Differs From Other Instruments and Styles

As you may know, there are a few types of guitar that most people learn and play when they first learn guitar. They are rock, classical, acoustic, and to a lesser extent flamenco.

Here’s a table that shows how difficult classical guitar is compared to other styles.

But, interestingly most of my favorite rock guitarists started with classical guitar, or speak very favorably about it, or learned it along the way after initially starting out playing simple chords in a garage band.

For example, the well known guitarist Kirk Hammett from the band Metallica was taught by Joe Satriani who began by learning jazz guitar. Which has a big emphasis on music theory that makes up a large part of learning classical guitar.

Here’s a table that shows how classical guitar differs from learning other instruments like classical piano.

Is Classical Guitar Good for a Beginner?

I first started learning classical guitar after seeing how helpful it was for learning rock guitar which I was very interested in, in my teenage years. With my extensive experience I thought I’d cover whether classical guitar is good for a beginner.

Generally, classical guitar is good for a beginner. Classical guitar will teach you the fundamentals of music theory which applies to all styles of guitar. But, learning to read music, which is required for classical guitar, is harder than reading tabs which are used to learn rock and pop songs.

Classical guitar helps a beginner learn the fundamentals of music. For example, a beginner will learn a song in a particular key such as in the key of C. This helps a new guitarist to remember music theory.

Whereas, if they learn a rock song, it isn’t stated what key the song is in. Learning about key signatures, time signatures, and the physical playing of classical guitar apply across all styles of guitar as well as other instruments.

Good sounding music always follows particular rules, which are learned either through learning music theory or by trial and error.

Through learning classical guitar you learn the rules such as what scales go with which chords, and therefore, you can learn new songs much more easily. And also create your own songs more easily.

Is Classical Guitar Harder Than Acoustic?

The reason is that acoustic songs tend to combine strumming chords, with playing licks. Licks are where you play a series of notes one after another like a guitar solo. Alternating between strumming and playing licks is quite tricky, and takes some time to master.

However, overall acoustic songs tend to be simpler and use less variation in the chords and scales. For example most popular acoustic songs are in the key of C, or G. And involve 6 chords.

The three chords that make up the major melody of the song. Plus an additional  chord for the bridge. Whereas, classical guitar uses a much wider range of chords and hand shapes.