It’s possible to play music without knowing music theory. But, in general, most musicians and people who play instruments will either know a little or a lot about music theory. Some subjects and topics are harder than others, so here are the results of a survey about whether music theory is hard to learn or not.

Is It Worth It to Learn Music Theory?

I did a survey on Reddit to see how difficult people found learning music theory. 133 people on Reddit about music voted. Here’s a table that shows the results and the percentages.

When I personally learned music theory it was a bit tricky in the beginning to get my head around what I was trying to learn. But, with most things I try to learn the more and more I learn about it the easier and easier it gets.

Whether you need to know music theory to play music well

When playing or composing music it’s not essential to know music theory. The way good music sounds is universal. And it’s not necessary to learn a bunch of rules to play an instrument really well or write a song that sounds good.

However, any parts of music theory you do get around to learning will help your music playing, and songwriting. With guitar, for example, knowing where each of the notes are, and the layout of the notes on the fretboard will give you a better understanding of your instrument.

This understanding of where each of the notes are helps you to see how the guitar is not very complex and simplifies the whole instrument. This makes it far less intimidating and makes it more fun to play. The same is true of all instruments. Here’s a summary of the parts of music theory that are worth it:

1. Understand how to keep time – good for playing in a band or orchestra

When music is regular and repetitive it sounds good. If you notice yourself clapping to the beat of a song, or tapping your foot to the beat, you know how music has an effect on your mood. Every song has what’s called a time signature. This designates which beats are emphasized when you’re playing music.

Knowing these subtle differences, and how to change the feel of a song is very important. It becomes especially important when you play in a band. All songs have a time signature and have a designated tempo. This is how fast each beat is. For example, a song can have a tempo of 60 beats per minute. This means each beat is a second in duration.

One of the most things about playing musical instruments is having the ability to freestyle or improvise. This is where you understand enough about parts of music theory such as the chords and scales that you can play randomly in a way that sounds good.

This can be done by using your ear, which is where you play around and find patterns that sound good. Every song has a chord pattern. Sometimes, this can be very hidden unless you understand music theory enough to be able to identify it.

For every corresponding chord pattern, there is a run of notes – called a scale – that sound good being played over the top of a song. This is known as the key of the song. Once you learn music theory enough and apply it a bit in practice you can easily freestyle solos or accompanying chords that sound really good.

3. Can compose songs and understand what makes a song sound good

Writing your own musical phrases and entire songs is a very interesting and fun aspect of music. If you learn a basic level of music theory you can decide on the mood of a song you want to write. And then be creative about creating melodies and a tempo, and feel for the song.

Certain genres of music use specific chords and scales that give them a characteristic sound. For example, when playing music that sounds Spanish or Flamenco you always start the run of notes – called a solo – on the A note, and then finish on an A note. This is provided that the chord progression starts with an A minor.

You can try this out by playing this video in the background on your computer:

And then using this virtual piano keyboard. Always start on a note of the keyboard that is an A. Then play any other random notes that are white keys but none of the black keys. When you play always finish the notes you play on an A again. You will notice you’re playing almost perfect and amazing-sounding Spanish solos.

The reason is that the A minor scale involves only the whole notes – which are the white keys. This changes based on what chord progression is playing.

And understanding what chord progression you’re using and the notes that sound good with it will allow you to write songs that always sound good. Then it’s up to you to be creative and discover something that is unique, and something that is your own.

4. Can communicate with others to make and play music

The names of chords are quite easy to master given some time. Particularly, on the guitar. For example, knowing what a C chord is and an E chord is doesn’t take long to learn. However, there are many different variations of chords. Such as a C7.

As you get more and more familiar with music theory you can understand what these chords are and why they’re used. For example, a chord that is a 7 version of a chord creates a sense of suspense, and then the chord after that resolves the tension which gives a feeling of finality to a chord progression. These chords are used as the last chord before the end of a chord progression.

When you know music theory such as which chords and scales go well with each other, you can jam with others. And also explain what you’re playing so they can know what to do to have some fun playing music.

Can I Learn Music Theory on My Own?

There are many advantages to learning music theory. It can be learned by taking a course at an institution like a university, or at a specialist music school that can be found in most cities. However, learning it on your own and at your own pace is also a very good option but you may be wondering if this is possible, here’s what I found.

It’s possible to learn music theory on your own. Music theory is similar in practice to the topic of mathematics. It’s a set of strict rules for how music works. A teacher is not required, and everything you need to know in music theory can be learned with free videos on Youtube.

The concepts of music theory are well known by many many people. None of the ideas are secret information, and the information to learn it is widely available. You can get some books on it from the library. Watch videos on Youtube – my favorite way, get lessons. Or, combine all of them together.

It’s commonly believed that learning music theory on a piano/keyboard is the easiest way. The reason is the layout of the keys is very logical and easy to understand. Unlike, an instrument like the guitar which has multiple strings.

The strings on the guitar are also laid out in a way that isn’t logical. But, rather they’re set up that way because it makes the guitar easy to play. Compared to if all of the notes were laid out on a guitar like a piano.

Classical music is often written as sheet music. Sheet music requires you to know how to read it. This involves music theory. The guitar is one of the most popular instruments, and many people that are getting into it wonder whether classical guitar is hard to learn.

I did a survey that asked guitarists if it is and summarized the results as well as the reasons why in this article about whether classical guitar is hard.

Can You Learn Music Theory Without an Instrument?

You can learn all aspects of music theory without an instrument. But, applying to an instrument does help because it involves the kinesthetic mode of learning. This helps you to learn the concepts more thoroughly and gives you a better understanding of music theory.

For example, in music theory you will learn that there are only 7 notes: A, B, C, D, E, F, G. Then there are the half notes in between some of them. For example, halfway in between an A and a B is a half note. It can be called an A# – said A sharp – which in practice means an A but up half. Or, it can be called a Bb – said B flat – which in practice means a B but down a half.

If you don’t want to spend much, you can get a recorder. The plastic whistle type instrument. You can pick one up for around $5. From there you can learn how the notes are laid out on a recorder. The blow into it to hear the difference. Alternatively, you can use a virtual keyboard on your phone or computer.

A piano is very easy to learn on because the notes are laid out in a way that is like numbers. 1, 2, 3, 4, 5, 6, 7 from left to right. And all the half notes in between each of the notes are the black keys. The hard part is trying to figure out where the first note is. This is something you kind of memorize after playing around on a piano or keyboard for a while. 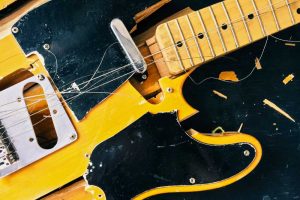